Very different to the image of Henry VIII that we have come to recognise today, this widely distributed portrait type pre-dates Hans Holbein’s more famous Whitehall Palace painting of the King (see fig. 2) and may have been produced within Henry’s lifetime. Numerous portraits would have been produced using this ‘late non-Holbein image’ pattern with artists working from a cartoon as opposed to a live sitting. Painted before the Holbein portrait, this well-known image was widely copied and distributed, suggesting that many leading figures received the message that possession of an image of the King was an act of loyalty, and that Henry was correct in identifying the importance of image as propaganda.

His appearance – square-shouldered, bearded, and with his hair worn short – is consistent with the image of him that emerges from written and pictorial sources around 1535. This suggests the portrait was painted around the time of Henry’s appointment as Supreme Head of the Church and during the dissolution of the monasteries. But, aside from these symbols of strength and power, the image varies from contemporary depictions in that it is lacking the image of magnificence that Henry was so careful to cultivate, and that as a result, we have come to expect. Henry’s costume in the portrait is rather restrained and informal in appearance. Although conspicuous luxury was frowned upon for the ordinary citizen in early Tudor England, it was considered essential for the monarch to present a public image that was distinctive and magnificent, and Henry, who as a young man was known for his athletic physique and attractive appearance, would appear in a completely new outfit at all important state occasions.

Recognising the power and importance of image, Henry moved away from this style of portrait and commissioned Augsburg-born artist Holbein to paint him. The most famous of these portraits by Holbein was part of a wall-painting of the Tudor dynasty at Whitehall Palace and was said to make visitors tremble at its majesty. This became the image that was circulated on coins, medals, and the seal of the monarch, as well as being replicated in later artworks and copied by the artists that came after. Holbein became the most-favoured court painter to Henry VIII until his death in 1543. The pattern and quality of royal image-making that he set down became the standard thereafter for the Tudor court.

Although not visually striking as compared to the Holbein, our portrait pictured here allows an important comparison to be drawn between elite images of the king intended for the royal court, and lower-quality copies produced for wider consumption. 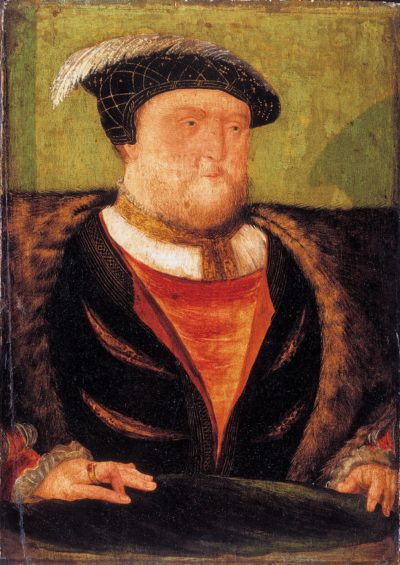