Portrait of Mary I 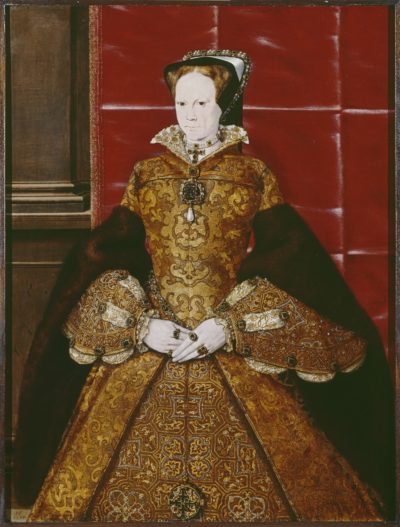 This portrait of Mary I (r. 1553-1558) was the first major portrait to be painted shortly after her coronation, some time around her 38th birthday, and before her marriage in July 1554 to Philip (later Philip II) of Spain.

Mary, like her father, recognised the importance of image as a means of communicating power and after visiting the English Court, Venetian Ambassador Giacomo Soranza wrote that ‘[Mary] seems to delight above all in arraying herself elegantly and magnificently’. Here she wears cloth of gold and cloth of silver, embroidered with gold thread, and encrusted with diamonds and pearls. She, like her father, also favoured the works of leading continental artists, surrounding herself with prominent painters, poets, writers, and musicians. She chose recently arrived Netherlandish artist Hans Eworth to paint this first official portrait, with Eworth painting Mary in the demure pose often used for women, even of the highest status, in the early sixteenth century. Hans Eworth is now recognised as the most distinguished foreign painter in Tudor England after Hans Holbein.

Mary was the daughter of Henry and his first wife, Katherine of Aragon, and was a devoted catholic, as her mother had been. The jewels worn for this portrait sitting were carefully chosen to demonstrate her catholic faith. She wears a distinctive Tau (headless cross) at her neck and from her waist hangs a reliquary of the four Evangelists, with the latter having belonged to her mother. She had found this in the Treasury, broken, and had had it repaired for her own use.

Henry had never intended that Mary should come to the throne and had instead supposed that his son, Edward VI, would bear his own heirs, but Edward had died at fifteen after contracting tuberculosis. Edward and his council, realising that his death was imminent, had attempted to block his Catholic half-sister’s accession to the throne by placing Lady Jane Grey in her place. However, Mary’s public popularity meant that council were forced to reverse this decision just nine days later.

During Mary’s short reign she attempted to reverse the Reformation in England that had been started by her father and managed to achieve reconciliation with the Catholic Church. Despite her efforts, she was largely unsuccessful in her attempts to restore Roman Catholicism to England and her marriage and the policy of burning heretics saw her initial popularity decrease during the course of her reign. She died without heir and the crown passed to her half-sister, protestant Elizabeth I.

We are able to date the portrait based of Mary’s attire. She is pictured wearing her winter apparel and sports two impressive diamond rings on the ring finger of her left hand, but no plain loop wedding ring. The painting was therefore started in the winter months of 1553 and finished before she was married in July 1554.