Mary I ‘A Booke of Ffees and Offices’

The illuminated title page displayed here, belongs to Mary I’s Book of Fees and Offices that was drawn up almost immediately on her ascension to the throne in 1553. The page is richly decorated with royal Tudor iconography: The Crown of England, the Royal Arms, and The Tudor rose. Among these established and recognisable symbols of Tudor monarchy can be found five beautifully detailed pomegranates. The pomegranate was the personal symbol of Katherine of Aragon, Henry the VIII’s first wife and Mary’s mother and may have been used by Mary to recall and honour the memory of her mother and to conjure up memories of the Catholic Court that had been present under the rule of her mother and father, before the break with Rome.

The document gives a detailed account of the names, offices, and fees of Crown officials who served Mary I at court and across the country – the network of officials she relied on to rouse support, establish law and maintain control as she reintroduced Catholicism to her kingdom. The Booke of Ffees and offices also allowed her to identify and put on notice all those who may waver in their support- those who had supported the protestant cause previously. Mary was establishing a Catholic Court and country and she had to be sure that those who were closest to her could be trusted to support her in her ambitions.

The content of this manuscript also allows a glimpse at the continuing splendour and magnificence of the Tudor court with musicians, composers, revellers, poets, harriers, hounds-men, and groomsmen being among those employed in the household of Queen Mary I. Mary may have differed from her father in her religious beliefs but from him she had learnt the importance of displays of power and magnificence as propaganda.

Mary reigned for just 5 years and died without heir on the 17th November, 1558. 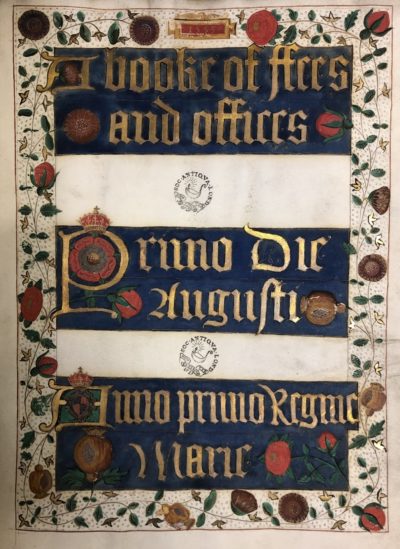