This exceptional document is the first of two volumes inventorying the belongings of King Henry VIII.

On 28 January 1547, Henry VIII died in his bedchamber at the Palace of Whitehall, aged 55. As part of the arrangements for Edward VI’s minority, commissioners were appointed to draw up an inventory of Henry’s movable goods and the contents of his 55 palaces. Compiled between 1547 and 1548, the resulting inventory had 17,810 entries including clothes, furs, jewels, furnishings, ships, chapel goods, and riding gear. Henry spent more on his palaces than any monarch that had come before and had amassed so many beautiful things that the inventory took 18 months to complete. The result was so large that it had to be bound into two volumes. The first of these volumes is what you see here.

When first compiled, the inventory allowed the keepers of the King’s possessions to keep track of the objects placed in their charge. It has now become a significant source for historians who wish to analyse the wealth, magnificence, and material culture of Henry VIII’s court and that of his children.

The document tells us how household ordinances were implemented; how the liturgical year was observed; and how Henry had passed the contents of the queen’s coffer on from one wife to the next! The inventory also provides a valuable insight into the private life of England’s most notorious monarch. The inventory details the layout of the King’s apartments at his Palaces of Whitehall and Greenwich and provides details of the King’s 21 removing coffers. These were the travel chests that went with the King when he travelled out on progress, campaigns, and state visits. His glasses, medicines, reading material, and keys travelled with him wherever he went. Intriguingly, Henry also travelled with a copy of his Assertio Septem Sacramentorum, the defence of the Catholic church that had earned him the title of ‘Defended of the Faith’. 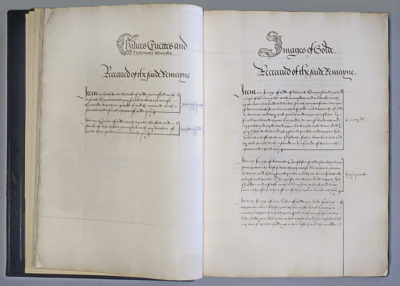