This vellum jousting cheque is a rare and prestigious example of the scoresheets used in jousting tournaments during the Tudor period, with this particular cheque tallying the scores of a series of jousting contests hosted at the Field of Cloth of Gold during a meeting of King Henry VIII and the French King, Francis I, in 1520.

The cheque you see here would have been produced by a Herald – the officiator of the jousting tournament – and displays the shield of arms of Francis I with the collar of the Order of St Michael (top left) and Henry’s shield within the collar of the Garter (top right).

Between the royal arms you can see the score charts for nine pairs of knights, each of whom ran eight ‘courses’ – meaning they participated in eight stages of the event. The two columns of rectangles record several key elements of each jouster’s performance: Marks on the top line of each rectangle record successful hits – with marks above the top line showing a hit to the head, and below the line showing a hit to the body. Scores against the middle line tally how many lances were broken, and scores on the bottom line tally how many faults took place during each joust.

Jousting was one of the principal forms of entertainment for Tudor noblemen, with tournaments granting participants the chance to showcase their strength, athleticism and military prowess. Both Henry VIII and Francis I were highly skilled jousters, although the nature of this meeting – a peace summit – meant they didn’t participate in this particular tourney.

Typically three types of contest were blended during the course of a tournament – the Tilt, which saw two opposing knights joust across a barrier; the Barrier – when opposing groups of knights fought on foot with spears and swords across a barrier; and the Tourney during which groups of mounted knights fought with swords. We know from written accounts that the tournaments held at the Field of Cloth of Gold summit were mainly tilting contests, broken up by tourneying and barriers.

Apart from a small collection at the College of Arms, very few jousting cheques survive due to the degradable nature of the Vellum (stretched and treated animal skin). 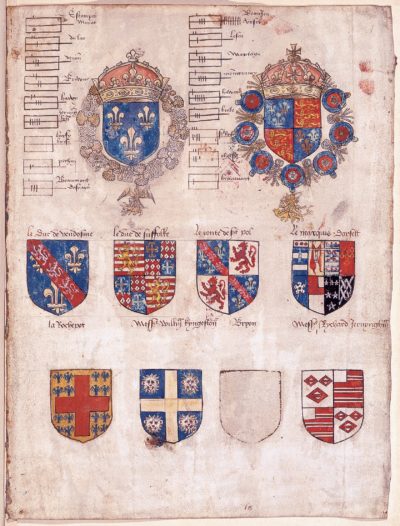