This manuscript is ‘A Booke or Inventorie of the Remaine of his Majesties Warderobe Stuffe, Ornaments of Howsehold … Remaineing now at Denmarke Howse …’. The contents of the wardrobe had been in the custody of Richard Browne, Keeper of His Majesties Standing Wardrobe. The clothes remaining in the wardrobe at Denmark House (where Somerset House, London, now stands) were inventoried in 1627, during the reign of Charles I (r.1625-1649), by his own Clerk of Wardrobe, William George, and this manuscript was the result.

The inventory includes details of arras (finely woven tapestries from Arras, Norther France) and wall-hangings, details of the robes of Henry VIII, and details of the parliament robes of Anne of Denmark (consort to James I). The entries listed under ‘Robes of King Henry the Eighth’ provide us a glimpse of the care the King took to ensure that his personal magnificence transmitted power, and inspired awe. There is various mention of cloth of purple (a royal colour that was off-limits to all but the King); cloth of silver; and cloth of gold; and several robes combining all three. Some robes were lined with fur, draped with a Spanish cape, or decorated with twists of gold. It is no wonder that his subjects stood in awe of their King and trembled in his presence.

Provenance
Found in the 'old part' of Somerset House before demolition in 1786. Presented to the Society of Antiquaries by Sir William Chambers, 12 January 1786 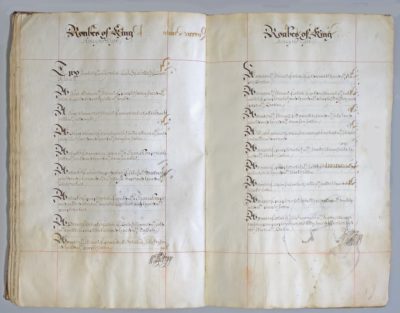