Copy of the Willl of Henry VIII 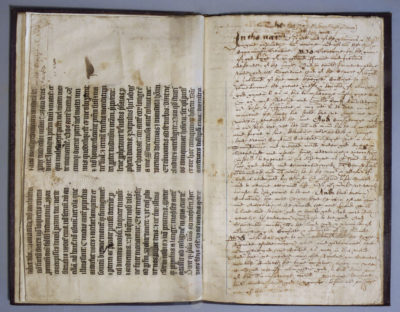 This is the Society’s copy of the last will and testament of Henry VIII, drawn up in December 1546, before his death at Whitehall Palace on 28 January 1547. Our copy is written in the hand of John Godsalve (1505-1556), who was a clerk of the signet to King Henry VIII. Godsalve was later knighted at the coronation of Henry VIII’s son, Edward VI, and went on to become one of the most trusted councillors of Mary I’s court.

To understand the importance of Henry’s will, we must first understand Henry’s Acts of Succession. The first Act, in 1536, had declared his daughters Mary and Elizabeth to be illegitimate. It stripped them of their title of ‘Princess’ and blocked them both from the throne, leaving Henry without an heir. His hopes lay with his new wife Jane Seymour, and the Act named her children or the children of any wife that followed her, as his successor. By the time the 1544 Act of Succession was issued, Jane Seymour had given birth to Edward. He was named as heir, with Mary and Elizabeth re-instated (but not re-legitimized) after their half-brother.

The later Act still gave Henry ‘full and plenary power and authority to give, dispose, appoint, assign, declare, and limit [the succession], by your letters patents under your great seal or else by your last will made in writing and signed by your most gracious hand’. This granted Henry the right to appoint his successor in his will, so deciding the future of the country. Henry’s power would thus continue even after his death. No royal will had done this before.

When, on the 30 December 1546 Henry’s final will was drawn up and stamped, it was indeed his nine-year-old son Edward who was appointed as his successor. Henry also named the regency council who were to support Edward during his minority. Edward Seymour, Duke of Somerset was named as ‘Lord Protector of England’. Edward VI acceded to the throne, as ‘King of England, Ireland, and France, Defender of the Faith and Supreme Head of the Church of England’. Henry’s will was dedicated, as his life had been, to ensuring the succession and the continuation of the Tudor dynasty.

This document is extraordinary for another reason. Throughout Henry’s life he had remained a pious man despite all that had come to pass. Henry dedicated the opening lines of his will to the ‘blessed Mother ever Virgin, our Lady Saint Mary’. He goes on to state that he was born to sin, as all mortal men are; he acknowledges his belief in transubstantiation; he leaves land to the church in exchange for daily prayers for his soul; and he ‘most humbly and heartily’ bequeaths his soul to God. Henry’s public policies had triggered the English Reformation, but Henry’s private faith had remained distinctly Catholic.

A clerk of the signet was responsible for preparing the king’s warrant and letters for dispatch which included attaching the seal of the monarch as means of authentication.

The Society’s copy of the will of Henry VIII is bound into an original vellum cover, formed from a leaf of a fifteenth century missal. The manuscript was discovered by Samuel Woodward, geologist and antiquary (1790-1838) among old deeds of the Bedingham estate in Norfolk.

Provenance
Discovered by Samuel Woodward (1790-1838) among old deeds of the Bedingham estate, Norfolk, and presented to him by Clement Unshank. Given to the Society of Antiquaries by Bernard Bolinbroke Woodward FSA (son on Samual Woodward), 15 June 1865.