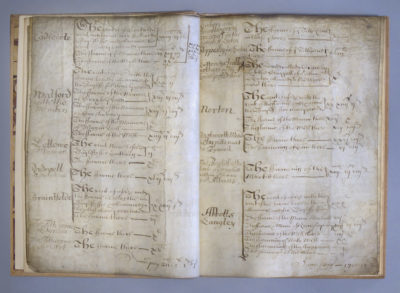 This manuscript records the yearly revenue of the abbey of St Albans from 1537-1538, ‘from the time of Richard Stephenadge late Abbott’ (heading fol.2). Like many monastic houses, the abbey accrued revenue from the rent of lands for sheep flocks and farming (as seen here); the produce of livestock; the production of ales; and from benefactions and community fundraising. Richard Stevenage was the last abbot of St Albans and surrendered the abbey to the king on 5 December 1539.

Monastic life was devoted to prayer – the giving of indulgences meant praying for others – and prayer was organised by a system of Hours. Additionally, Friars were responsible for preaching sermons, celebrating masses, and hearing confession. But the writings of Humanist scholars, such as Erasmus and Martin Luther, had thrown into doubt the need for this type of prayer and there was a thought amongst bishops and scholars, such as Erasmus, that the monks were not fulfilling their proper function, nor abiding by the strict rules that they were supposed to follow.

Further, Henry’s defence of the Catholic Church against Lutheranism had seen him awarded the title of defender, but it had isolated England from the rest of Europe where Protestantism had taken hold. Now, as the newly titled Supreme Head of the Church, Henry found himself cut off from Rome’s economic trade powers at a time when he desperately needed funds. (The peace of the Field of Cloth of Gold had not lasted, and England was at war with France).

It was at this crucial moment that Henry’s leading Councillor, Thomas Cromwell, drew Henry’s attention to the vast wealth of the church. He also claimed that the clergy were still loyal to the Pope and were syphoning off money to send to Rome. The claim was a false one but it motivated Henry to obtain an Act of Parliament that allowed him to visit monasteries and in 1535 the Valor Ecclesiasticus (the great survey of monastic wealth) began. Thomas Cromwell’s commissioners also visited monasteries to look for scandal and to find and uncover corruption. Using this ‘evidence’ Cromwell began a four-year campaign of destruction.

In 1536 Henry was granted an Act of Parliament to dissolve the smaller monastic houses (around 400 of them). After this Henry moved on to the larger monasteries. Rather than waiting for the second Act of Suppression, that was passed by Parliament in 1539, the King’s commissioners pressurized the abbots and monks into surrendering their monasteries to the King, as was the case with St Albans Abbey. By 1540 a total of 800 religious houses had been dissolved.

During the Dissolution everything of value was taken from the monasteries – books, manuscripts, gold, and land. Monastic land made up one third of the land of this country and this, along with some of the monastic houses, was sold off to Henry’s courtiers. Many of the houses and sites that were not sold off were left to ruin and became a visual reminder that the Catholic church had fallen and that the power of the church had moved to the power of the state.

Monasteries had been at the heart of their communities, serving as schools and hospitals for their parish and giving alms to the poor. With the loss of these houses came the loss of education (for both men and women), and the loss of access to healthcare and social support. The dissolution of the monasteries was met with great resistance and triggered a rebellion in the North. This rebellion became known as ‘The Pilgrimage of Grace’ with supporters marching on London.