This is an original wax impression of the third Great Seal of Henry VIII. The Great Seal is the official seal of the monarch and has been used as a means of authentication by Scottish and English monarchs since the eleventh century. The first British king known to have employed a seal to validate documents was Edward the Confessor (1042-1066) and the double-sided design has remained unchanged ever since. On one side the monarch is shown in ‘majesty’- enthroned, crowned, and holding royal regalia. On the other, the monarch is show as ‘warrior’ – mounted on horseback. The double-sided seal would be used as a pendant seal and would be attached to the foot of a document using a cord, tag, or tongue. Our seal has a length of woven green and white silk cord still attached.

The Great Seal represents the signature of the monarch and as such, has been referred to as the ‘key to the kingdom’. When a Great Seal was decommissioned, it would be broken in front of witnesses to ensure it could not be used or copied, and it was considered treason to forge the Great Seal with the death penalty for anyone who was convicted of this crime.

The matrix that would have been used to create this impression was designed by Morgan Wolff. It came into use in 1542 and was used until Henry’s death in 1547. In 1538 Henry had been stripped of his title of Defender of the Faith by Clement’s successor, Pope Paul III, after he broke away from Rome. But if you look carefully, you will see that the Fidei Defensor title still appears on our seal.

This is because Henry had approached the English Parliament in 1543 and had asked them to re-instate his title of Defender. This new title, awarded the following year, referred to his defence of the English church and appears on this seal alongside the title of [Supreme] Head of the Church in England. 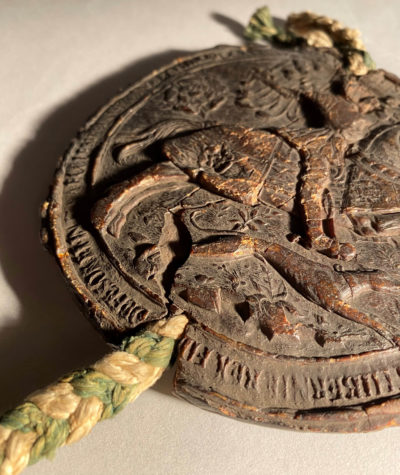