Field of Cloth of Gold 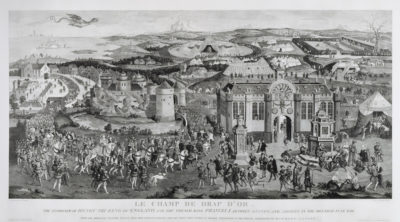 Pictured is an engraving by James Basire, taken from the second of two large paintings created to commemorate the occasion of Henry’s meeting with Francis I at the Field of Cloth of Gold.

The 7 June 1520 marked the start of an 18-day celebration known as the Field of Cloth of Gold in Guisnes, not far from the then English-owned Calais. One of the most spectacular events of Henry VIII’s reign, the summit consisted of a range of festivities: sports events, religious ceremonies, tournaments, entertainment, fireworks*, and banqueting.

The competitive magnificence between the two courts saw the English erect a full-sized temporary palace in the classical style, complete with brick foundations, classical pillars, glass windows, and carved sculptures; a chapel, a gallery, and a castle; Henry dined in a tent of cloth of gold (which can be seen directly behind the palace); and gold fountains ran with wine and beer. Not to be outdone, Francis had a large tent constructed, that stood 120 feet high. The tent of cloth of gold was adorned with astrological symbols and supported by two large mast-like structures, and the French king had the noblewomen of his court appear in the latest Italian Renaissance fashions. So lavishly decorated and sumptuous were the tents, pavilions, furniture and costumes of the attendees that the summit came to be known as the Field of Cloth of Gold.

The events that took place were equally impressive with chivalric jousting tournaments and feats of arms (combat on horseback and on foot) held every day except Sundays. Both monarchs were young, ambitious, and competitive and both were impressive in the joust. The jousting and feats of arms allowed them to display the strength and force of which they were both capable.

Here, the festivities that took place are shown in one composite view. The right foreground is dominated by the magnificent palace structure and behind this can be seen the jousting arena with the two royal couples watching the events. The impressive structure of Francis’ tent can be seen in the central distance, and the kite that took the form of a dragon can be seen hovering over the field in the top left. Henry appears three times.

Accounts vary as to the nature of the dragon. It has variously been described as a firework, a kite, a banner displaying the French Salamander, and a flag displaying the Welsh dragon.  Likely a kite, it appeared unexpectedly during the Corpus Christi mass that concluded the summit (it seems it was intended for some later point in the service but was accidently set off/ became untethered), and it is included here in the painting of the Field of Cloth of Gold, hovering above the festivities in the top left corner.

In 1770 Sir Joseph Ayloffe gave an account of the painting to the Society, and it was agreed it should be copied and published as a print. The drawing, although reduced in size from the painting itself, contained so much detail that innovative techniques were employed to fit the image on one sheet. In all, 400 copies were printed and distributed amongst the Society’s Fellows.

Provenance
Commisioned by the Society of Antiquaries