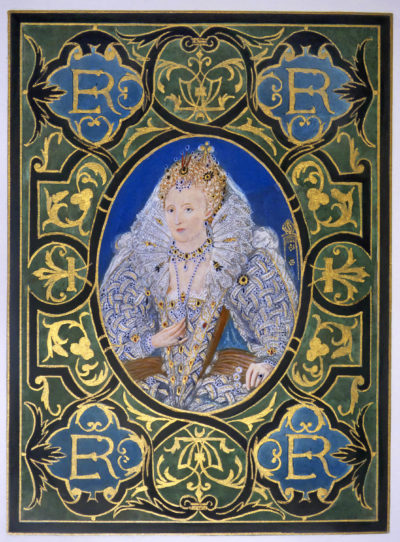 Seen here is an engraved colour copy taken from a miniature of Elizabeth I, designed by Nicholas Hilliard (1547-1619), and stored in the collection at Ham House. The miniature is just one of many that were produced from Hillard’s portrait, and these would be purchased and worn by Elizabeth’s subjects who wished to show loyalty to their queen. Our engraving appears in the 19th Century volume Queen Elizabeth, authored by The Right Reverend Mandell Creighton.

Below this is Elizabeth I’s second Great Seal, designed by Nicholas Hilliard 1584. Hilliard worked with Derrick Anthony, chief engraver of the Mint, to produce a new silver seal matrix from which this wax impression was made. The images on both sides – of the monarch in ‘majesty’ and as equestrian warrior – were approved by the Queen. The detailed representations of her horse, costume, badges, and regalia, testify to Hilliard’s great skill as a designer, and around the edge runs the legend: ELIZABETHA DEI GRACIA ANGLIE FRANCIE ET HIBERNIE REGINA FIDEI DEFENSOR – ‘Elizabeth, by the Grace of God, Queen of England, France and Ireland, Defender of the Faith’. The seal came into use in 1586.

When the Catholic Queen Mary died without heir, the throne passed to her half-sister Elizabeth, in line with the succession as outlined in Henry VIII’s will. Her accession marked another drastic change for English religion. The protestant Elizabeth was quick to re-establish a protestant court and quick in attempting to reverse the policies of her Catholic half-sister. An Act of Supremacy saw Elizabeth titled ‘Supreme Governor of the Church’, much like her Father’s title of ‘Supreme Head’, and early in her reign she issued a proclamation ordering the re-introduction of English Prayer. The 1559 Act of Uniformity ensured that English worship followed the Book of Common Prayer, and English Bibles were re-instated in churches, whilst orders were issued for images and idols be torn down. Like her father, Elizabeth deployed commissioners to tour the kingdom ensuring that her edicts were followed by the clergy, but scrutiny of this kind did not last, and some traditional practices continued or were retained and absorbed into the new form of English post-Reformation religion.

By the end of the sixteenth century, Elizabeth had been excommunicated by the Pope, and England had ceased to be a Catholic country once again and so Elizabeth, like her father before her, was both Supreme Governor of the Church in England and Defender of the [Anglican] Faith. When in 1603 Elizabeth died without heir, the Tudor dynasty ended, but the title of Fidei Defensor- gained, lost, and re-imagined by her father- and the title of Supreme Head of the Church, passed on. The titles have been passed to and used by every English monarch since.

To this day British coins are inscribed with the title of ‘Defender of the Faith’, represented by the initials FD or the abbreviated FID DEF, in reference to the original Latin phrase.

During the reign of Elizabeth I, a small group of antiquaries formed, that called themselves the college of Antiquaries. The destruction wrought by the dissolution of the monasteries had triggered an increased interest in the past and a wish to preserve objects of British Antiquity. These early antiquaries began to study and record historic monuments in the landscape, as well as manuscript material relating to family property rights, heraldry, and genealogy. The College of Antiquaries was short-lived, but it marked the beginning of English antiquarianism. In trying to erase the past, Henry VIII triggered its preservation.