Here we have an eighteenth century engraving of a sixteenth century cast silver medal of Henry VIII, taken from the original that sits in the British Museum. The medal was commissioned in 1524, three years after Henry was awarded his papal title. Henry’s portrait features on the obverse of the medal, and on the reverse the inscription DEFENSOR FIDEI appears beneath the Tudor rose – another lasting example of successful Tudor propaganda. The inscription above, ODOR EIVS VT LIBANI, translates as ‘its smell [shall be] as Lebanon’, likening the perfume of the Tudor rose to the fragrant scent which emitted from the cedars of the valleys of Lebanon. Next to this is a 1534 proclamation issued on behalf of the King ‘concerning the price of meat’, issuing instructions to butchers to sell pork, mutton, and veal, at specific prices. The proclamation begins with a Latin heading that translates as ‘Henry VIII, King of England and France, defender of the faith…’.

Henry had worked hard to gain his title, and he wanted to make sure that it was acknowledged. In adding it to the proclamations, writs and medals that circulated throughout the realm, Henry ensured that all would know of his status and hoped that his subjects would view him as a unifying force. Henry had initially defended the Catholic faith against the developing threat of the Protestant Reformation. But when he turned against the Pope (or Bishop of Rome as he came to be known), Henry kept the title ‘Defender of the Faith’ and redefined it in his own image. 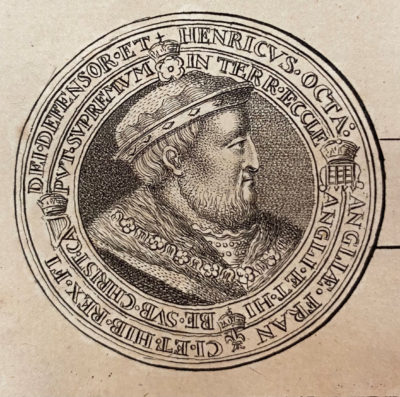