Portraits of Katherine of Aragon and Anne Boleyn

Here we have a further two portraits – an engraved copy of the portrait of Katherine of Aragon, by an unknown artist, in the collection of the National Portrait Gallery and a copy of Holbein’s c.1533 portrait drawing of an unknown woman, formerly identified as Anne Boleyn, taken from the original chalk drawing in the Royal Collection.

As monarch, Henry’s prime concern was to safeguard the succession by producing a legitimate male heir, but by 1527 his marriage to Katherine of Aragon had failed to produce a son. Henry took this to be a sign of God’s disapproval and looked to the Bible to back his assertion, finding his answer in the Book of Leviticus. His wife was his brother’s widow and such a union was forbidden by God. Henry believed that he should not have married, and indeed, had not married Katherine in the eyes of God, and believed that by removing her, he would be carrying out God’s will.

Henry had also by this time fallen passionately in love with Anne Boleyn, who had arrived at court five years earlier as a Lady in Waiting to Katherine. Anne Boleyn encouraged Henry’s affections but refused to become his mistress and so Henry had set his sights on marriage.

In 1527 Henry asked Pope Clement VII to annul his marriage to his first wife, Katherine of Aragon on the basis that she had not produced a living heir. He then planned to marry Anne Boleyn. Henry’s request was not entirely new – there was an understanding amongst European Monarchs that an heir would be needed to ensure the continuity and stability of a dynasty, and Papal dispensation – allowing a monarch to set aside his first wife and to marry another – had been granted before. But when Henry requested it, Pope Clement refused, concerned that the annulment would undermine papal authority and antagonise Katherine’s nephew, the Holy Roman Emperor Charles V, now the most powerful ruler in Europe.

Henry continued to push for annulment and negotiations continued for several years, but when it became clear that the Pope would not be moved, Henry took steps to restrict the Pope’s power in England. By 1533 – around the time her portrait was taken – Anne was pregnant and Henry married her (whilst still married to Katherine) to ensure the legitimacy of their unborn child (later Queen Elizabeth I). In 1534 Henry declared that he alone should be the final authority in matters relating to the English church. 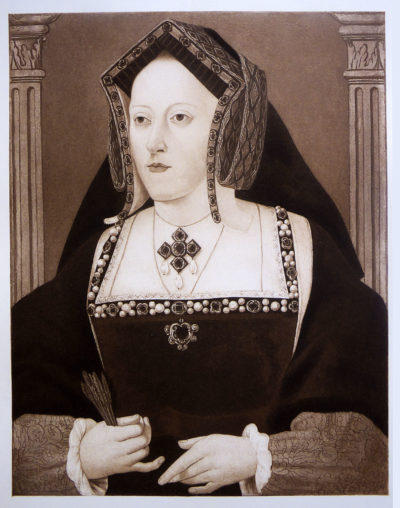