The Itinerary of John Leland the Antiquary 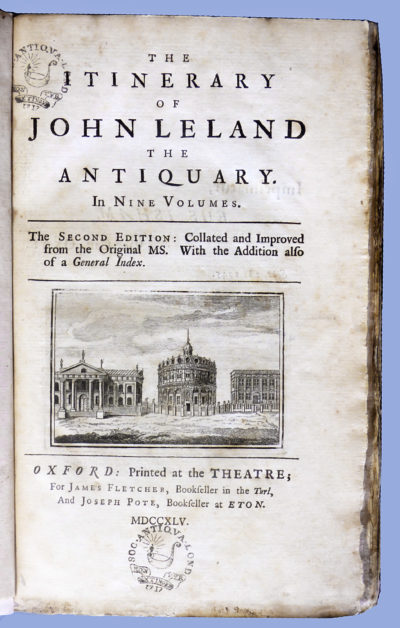 John Leland (1505-1552) was the first person to publicly declare himself an antiquary and the first real example of an antiquary as we would recognise. Leland had received a humanist education, first at St Paul’s School, London, and then at the University of Cambridge, after which he became a priest, a court scholar, and acting Keeper of Henry VIII’s libraries.

Leland was a staunch supporter of Henry’s religious reform, but as an antiquary he was appalled by the destruction wrought by the dissolution of the monasteries and of the loss of rare and ancient texts that were so important for future scholarship. In 1533 Leland received a licence from the King to search for rare books by ancient authors in the monasteries and colleges of the realm. Leland toured much of the Kingdom as the dissolution got under way and saved, not just the works of ancient authors, but monastic texts and important manuscripts, all of which were lodged in the King’s own library. Leland had hopes of one day opening the collection as a research library for scholars.

In addition to his royal commission, he took the opportunity of travel to note down all that he saw – castles, churches, gates, bridges, tombs, and inscriptions- in hopes of producing a comprehensive description of Britain. In a letter to Henry VIII know as ‘the New-Years Gift’ he gave an account of his activities, explaining that he hoped to produce a book to be titled ‘De Antiquitate Britannica’ and a catalogue of all British writers, ‘begynning at the Druides’.

Leland completed his catalogue but not the greater work. The scale of his ambition made it hard to give any depth or coherence to the copious notes he had taken, or the material that he had collected, and the attempt to do so eventually drove him mad. However, his work was, and remains, incredibly valuable as he created the only survey of its kind before the reign of Queen Elizabeth I, and in so doing, he laid the early foundations for the modern antiquarian movement.

This survey became known as ‘The Itinerary of John Leland’ which was regularly consulted by antiquaries before being published in nine volumes by the antiquary Thomas Hearne between 1710-1712. The Society’s second edition was printed 35 years later – demonstrating the continued importance of this Tudor antiquarian’s work.