This is the Society’s 1553 copy of The Great Bible in English, bound into a volume with the later 1560 Book of Common Prayer, and ‘Certayne sermons appoynted by the Quenes maiestie’, published during the reign of Queen Elizabeth I. Accompanying this is a 1541 proclamation ‘for the Bible of the largest and greatest volume to be had in every church’. This followed on from an earlier issue of the same and was used to reiterate the order that every church should hold, and preach from, Henry’s English Bible.

In 1538 Thomas Cromwell issued an injunction on Henry’s behalf, ordering the clergy to purchase a copy of an English Bible to be placed in every parish church. Further, the Bible was to be read aloud in church services throughout the Kingdom, and the clergy were to place the Bible in ‘some convenient place’ so that parishioners ‘may resort to the same and read it.’ To ensure that this injunction would be fulfilled, Henry authorised the printing of The Great Bible the following year. This was the first authorised printed edition of the Bible in English. This was an about-turn for Henry, who had previously deemed it heretical to translate the Latin text into English.

The edition was prepared by English ecclesiastical reformer Myles Coverdale* under the direction of Thomas Cromwell (Vicar General) and around 9000 copies were printed – enough for every parish in the Kingdom.

Henry’s Bible began with a woodcut title page – the first page that every person would see – that served as a visual reminder that Henry was quite literally the Head of the Church in England. The page depicted Henry sitting in majesty at centre-stage, directly below God, handing down his bible (the word of God) to his clergy, who are seen passing the volume to the congregation, right at the bottom of the page. This was the first time that everyday people could see a Bible in a language that they could understand, and it was the King who had made this possible. Henry VIII had made himself head of the church and now it was he who would communicate the word of God to his people.

The Society’s Bible was published in 1553 during the reign of Henry’s son, Edward VI. By the time of its publication, evangelicalism had taken hold, with services held in English rather than Latin, using the English Bible alongside an English prayer book authorised in 1549. 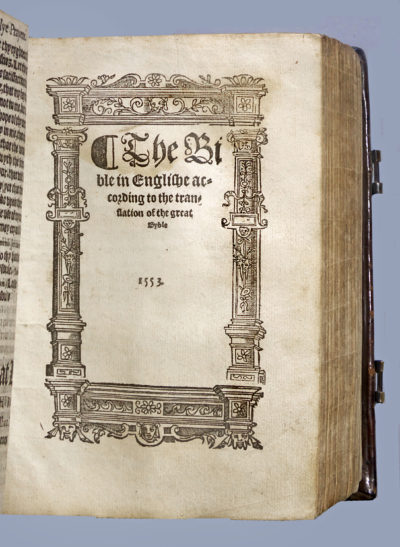