This is the Society’s early sixteenth century copy of Erasmus’s Hyperaspistes Diatribae adversus Servum Arbitrium M. Lutheri (A Defensive Shield against Martin Luther). The work was published in March 1526 and this second edition was printed by Johann Froben in the same year. The volume is beautifully presented in a blind-tooled binding of alum-tawed pigskin, secured with delicate metal clasps which still function.

Desiderius Erasmus (1467-1536) was a Dutch humanist scholar and one of the most celebrated intellectuals of the early sixteenth century. He was a few years older than Luther and had been writing on church reform for some time before Luther’s 95 Theses appeared.

Early on, Erasmus and Luther had found mutual agreement on points of reform. Luther had read and been inspired by the works of Erasmus, and Erasmus was sympathetic to, Luther’s early critiques of corruption within the Catholic church. Both detested the pomposities of the church and the physical and material manifestations of religion that they saw around them. Erasmus believed in personal piety rather than outward displays of faith such as – pilgrimage, penance, shrines, and rituals. Luther found the church practice of selling indulgences as a way of absolving sin, corrupt and objectionable. Both believed in the Bible as the true source of religious authority, and in a simpler form of faith.

However, where Erasmus was committed to maintaining the unity of the church that he believed could evolve and change, Martin Luther wanted a full-blown reformation. After Luther’s expulsion from the church in 1520, Erasmus began to distance himself from the protestant reformer and was eventually called, by the church and his royal patrons, to speak out against him.

Written in two parts, the Hyperaspistes deals with the question of free will and was written in response to Luther’s De Servo Arbitrio (On Enslaved Will) published in 1525, which in turn was written in reply to Erasmus’s De Libero Arbitrio (On Free Will). In his Servo Arbitrio Luther argued that humans could not achieve salvation through good deeds, as they could not choose between good and evil, and so could only be redeemed through the will of God. Despite attempts to quell the doubts that had been planted by Luther’s writings, the Protestant Reformation had begun. 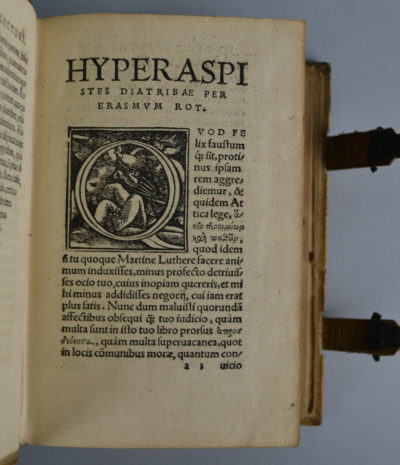