This chronicle of English history, first printed by Caxton in 1480, is an English translation of the Prose Brut chronicle (originally derived from Geoffrey of Monmouth with later additions), collated with a geographical description of Britain from the Polychronicon of Benedictine monk Ranulf Higden (d.1364). The Brut was considered the ‘standard’ political and secular history of England during the fifteenth century; with its translation into English and the advent of printing, it became even more widely disseminated. Some thirteen editions of the chronicle were published between 1480 and 1528.

Although this chronicle was published during the reign of Henry VII – seven years before his son would ascend the throne as Henry VIII – we can see the later impact of Henry VIII’s regime on the Society’s copy of the text. In 1534, the Act of Supremacy established Henry VIII as Supreme Head of the Church, replacing the authority of the Pope. An order was issued to all parish priests that all references to the Pope should be erased from liturgical books; there was to be no doubt across England that the king was the one and only Head of the Church.

Though this is not a liturgical work, we may speculate that its unknown owner nevertheless wished to comply with the new practices of the Reformation, perhaps as an ardent believer in the legitimacy of Henry’s authority – or perhaps censoring out of fear of reprisal for owning ‘popish’ texts. We also find mentions to St Thomas of Canterbury struck through. A Royal Proclamation of November 1538, issued by Henry and Thomas Cromwell, ordered that Thomas Becket – one of the most popular saints of the High Middle Ages – was to be ‘unsainted’. Images of Becket were to be destroyed, along with his shrine at Canterbury, and all references to his festival and veneration obliterated from service books. 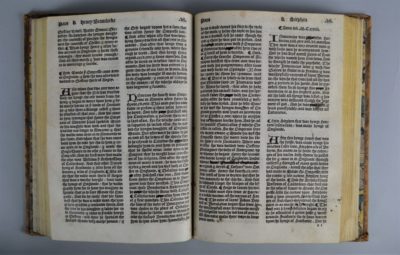