This volume contains part of the correspondence exchanged between Martin Luther and King Henry VIII. The year following the publication of Henry’s ‘Defence of the Seven Sacraments’, which earned the King the title of ‘Defender of the Faith’, Luther published his Contra Henricum Regem Angliae, a scathing response to Henry’s pamphlet in which he attacked both the church hierarchy and the authority of the King. Thomas More was commissioned to reply, and his Responsio ad Lutherum was printed in two editions in 1523. Two years later Luther wrote his Epistola ad Henricum VIII, humbly apologising for any offence he may have caused. The apology was prompted by the belief that Henry had by this time come to view Lutheran Protestantism in a more positive light, but this was not the case and Henry’s own Responsio – the text illustrated here – made it clear that their correspondence was now at an end.

Martin Luther had issued his grievances against indulgences and other practices of the Catholic Church in hopes of prompting an academic debate that would result in ecclesiastical reform. But the dawn of printing meant that Luther’s message quickly spread across Europe, and by 1518 his books were being imported into England. Meanwhile Pope Leo X issued a bull clarifying the Church’s position on indulgences as a means of absolving sin, and declared Luther’s writings to be in conflict with the teachings of the Catholic faith. By 1520 they had been deemed heretical.

In response to this, the confiscation of Luther’s works was ordered in London and Cambridge and bookshops in the cities were searched for the heretical works. The following year saw Cardinal Wolsey organise a conference where the problem of Luther was discussed and theologians were encouraged to speak out against him. Shortly afterwards, copies of Luther’s books were burned at St Paul’s Cross in London.

Henry VIII had read Martin Luther’s tracts and Wolsey, knowing that a royal refutation would please Rome, persuaded Henry to write a public response. Thomas More would certainly have played a part, but it is reasonable to suppose that Henry added his own thoughts and finishing touches to the text. The pamphlet Assertio Septem Sacramentorum (Defence of the Seven Sacraments) was published in 1521, with authorship attributed to Henry and dedicated to the Pope. It is this treatise that ultimately gained Henry the title of ‘Defender of the Faith’ which was awarded by Pope Leo X on 11 October 1521. Luther was excommunicated the same year. 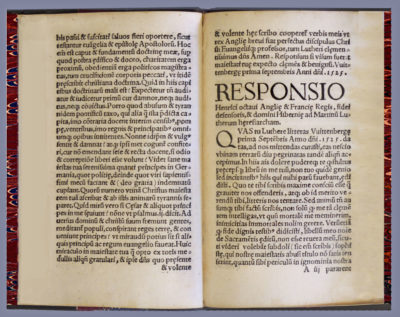