A Proclamation for the Abolishing of the Power of the Pope 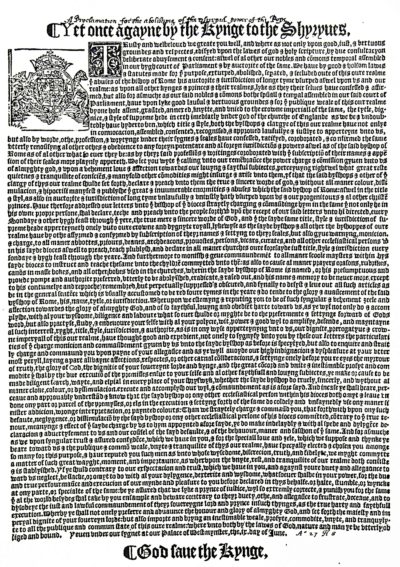 The Society’s collection contains a printed proclamation issued by Henry in June 1535. In it the King refers to the sermon campaign he has launched by letter, instructing all the clergymen of his realm (bishops, ‘abbots, priors, deans, archdeacons, provosts, parsons, vicars, curates, and all other ecclesiastical persons’) to ‘preach the true and sincere word of God’ to the people on Sundays and on all important feast days. This meant, of course, teaching them to acknowledge the Crown as the Supreme Head of the Church.

After Pope Clement VII’s refusal to annul Henry’s marriage to his first wife, Katherine of Aragon, Henry’s Reformation Parliament (as it came to be known), had passed a series of Acts, designed to pressurise the Pope into agreeing to the annulment. When these proved unsuccessful, Henry’s adviser, Thomas Cromwell, persuaded him that it would take just two further Acts of Parliament to push through the divorce. The first Act to be put before Parliament in 1533, ‘The Act in Restraint of Appeals’ banned English subjects appealing to any foreign authority in ecclesiastical matters. This Act effectively blocked Katherine of Aragon from asking for the Pope’s support with regards to the divorce and ensured that she would have to instead address Henry’s Parliament – the final authority on the constitutional affairs of England.

The second Act, the Act of Supremacy, came the following year. The Act of Supremacy asserted that the King was, and always had been, the Supreme Head of the Church in England. Thomas Cromwell used the twelfth century book ‘The History of the Kings of Britain’ written by Geoffrey of Monmouth as his source for legitimising this supremacy. The book traced the ancestry of the Kings of Britain right back to King Arthur and was used to insinuate that this was not a new title but a re-gained right. The Act empowered Henry to ‘visit, redress, reform, correct or amend all errors, heresies and enormities’ within the English Church, and all funds that had previously been paid to Rome were redirected to the Crown.

The power and responsibility of the English king had been recognised by Parliament and was now to be welcomed by the English people. Thomas Cromwell had already written to the bishops of England on behalf of the King, ordering them to preach in support of the supremacy and the Society’s 1535 proclamation followed shortly after. Preaching the word of God was now synonymous with teaching the populace to accept the monarch’s authority over that of the pope, instilling the notion that obedience to the Crown was divinely ordained. The break with Rome was complete and by 1536, Henry hand absolute power over church and nation.

In response, the Pope expelled Henry from the Catholic Church and stripped him of his papal title of Fidei Defensor or ‘Defender of the Faith’.